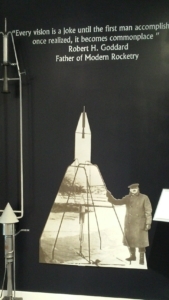 Dr. Robert Hutchings Goddard (1882-1945) is considered the father of modern rocket propulsion. Born in Worcester, Massachusetts, Goddard was an American engineer, professor, physicist, and inventor who is credited with creating and building the world’s first liquid-fueled rocket.
On March 16, 1926, Robert Goddard successfully launched the first liquid-fueled rocket in Auburn, Massachusetts. The first of-its-kind rocket reached an altitude of 41 feet, lasted 2 seconds and averaged about 60 miles per hour.
Goddard’s work as both theorist and engineer anticipated many of the developments that were to make spaceflight possible. He has been called the man who ushered in the Space Age.