MASM director Larry McGlynn is part of a team of Space Dealers!  Together with Torie Lazaros and Cole Sommers, they hunt down and flip space kit and space hardware. Whether it’s the pilot’s seat from Gemini 12, an uneaten astronaut meal pack or the kit bag Buzz Aldrin took to the moon, if something’s been to space it’s worth BIG money. Every item they come across has a story – each one is a fascinating episode in the history of space exploration.  And sometimes, there’s a puzzle too: bits of space kit aren’t always easy to identify.

These three are not just dealers, they are space detectives!  Sometimes, to realize an item’s true value, they have to find out where it was used, and how.  So they have to speak to people in the know – real space engineers and designers, and occasionally, the heroes who played a part in actual space missions.

Click a Thumbs Up for Space Dealers on Netflix and: 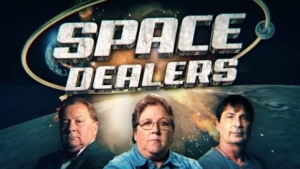